So, I’ve kinda gotten carried away with the whole Pinterest challenge thing. I’ve chosen multiple projects to complete over the course of the week and here is project number one. It was a small project that cost me less than $5,  so I thought I would share it with you before the Tuesday reveal day…plus I’m pretty jazzed about the one I have planned for Tuesday!

The problem is that we have a teeny tiny sink in that bathroom and we weren’t sure that the pump would stay on the sink when the nieces and nephews come over…or when we would use it for that matter. Consequently (10 cent word of the day for Amy!), we’ve been looking for something else. I don’t know why, but we seem to have the biggest problems choosing some of the smallest things. I’m not sure what our problem is, but we were struggling. then I got this (p)inspiration

Awwwwwesome! One day when I was at Target (which seems to be most days) I took a trip down the soap aisle and came home with these

One for the bathroom and one for the kitchen. I took them outside along with some old newspaper. I figured our deck on a sunny day was a good place to start this project, so I put the newspaper on the railing of the deck and then clamped it on. That’s right, I said clamped – the wind was blowing. Need a visual? 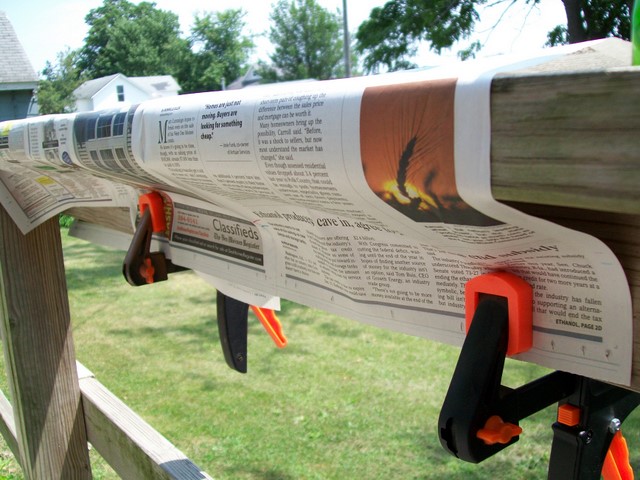 We have quite a few of those clamps from our woodworking projects-a-la-Ana, so why not use them, right? It was perfect to keep my paper from blowing away! Just call me resourceful…sometimes. With my paint booth in place I removed the stickers from the two bottles of soap which turned out to be more difficult than I thought it would be. The stickers didn’t peel off clean, so it took a little elbow grease aka vegetable oil to get the sticker gunk off. I put a little veggie oil on a paper towel and scrubbed a little and soon they were gunk-free and ready for paint!

Time to break out the ORB paint

Oh how I love this stuff! Thanks for the new found addiction Rachael! I’ve also used the hammered copper on a different project (stay tuned for that one) and I love that too. The key when using this stuff is to keep it moving and the paint will look great. Keep in mind that the day I was painting outside, the wind was blowing. It probably took a little longer to paint and a little more paint considering three days later I’m still trying to scrub ORB paint off my hands 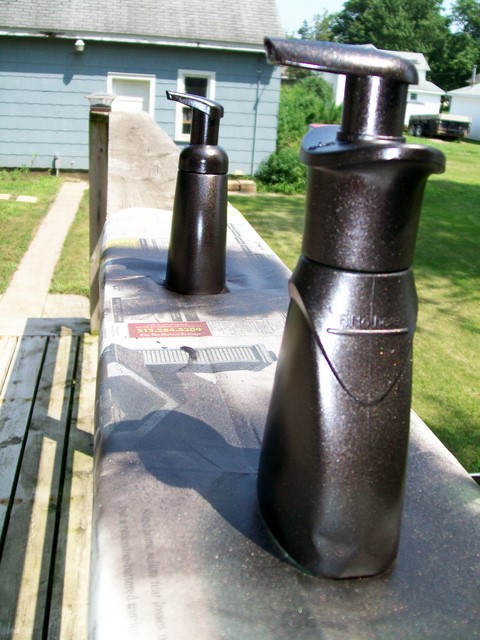 I let them sit outside to dry for a while in the sun, but the humidity has been not so fun lately and I had to bring them inside to finish drying after about 2 hours. Cost breakdown

It fits perfect in the half bathroom and if it falls, it’s plastic and probably won’t break but if it does it was less than $2. It’s also refillable, so I won’t have to paint every time we run out of soap 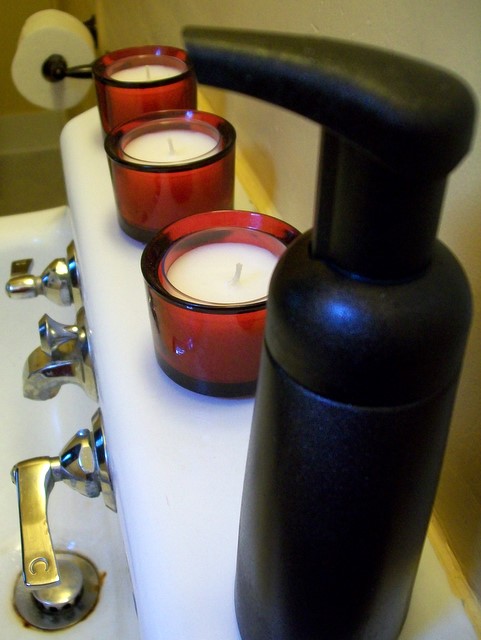 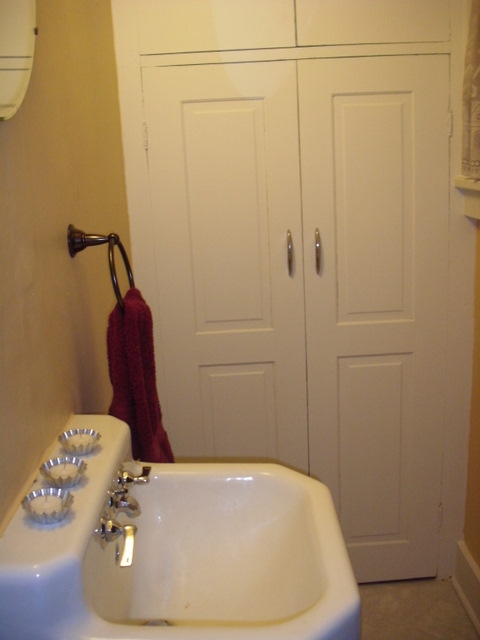 I got those new red candle holders at Ikea (hallelujah) on our trip back in April (see posts on that trip here and here) for $1.99 for the set of three – score! Those candles are not your ordinary candles either. They are these new candles from Bath and Body Works that were on sale for 3 for $5!

You may have already seen my post on my love of smores. Find it here if ya missed it. I totally love that my bathroom now smells like smores! It’s sooooo wonderful!

Update: When I first pinned this idea, it didn’t have the original project linked to it – so sad. Allison from House of Hepworths stopped by and let me know that this was her original creation (thanks Allison). If you look at her tutorial and mine you’ll find some differences, but they are quite similar. She recommends using a plastic paint for the first coat. I totally agree with her. The ORB paint that I have in my arsenal is an all surface paint, so make sure a plastic paint is the first one on your plastic. Allison’s been using her pumps quite a bit longer than I have so maybe mine will change, but both seem to be holding up very well. Props to Allison for such a great idea!